Finally this post is up! This whole process has taken me forever...from finding the right theme/paint/layout and then the little projects in between the BIG project- a bunk bed! Charlotte was over the moon thrilled. I'll never forget the look on her face when we "revealed" it to her for the first time!

So here's what everyone wants to see- pictures! As far as a theme, there really isn't one. I just collected some whimsy, feminine, soft things that I thought fit the girls' personalities. So there's watercolor floral, polka dots, paisleys, pom-poms, sparkles, and lots of mint and coral. Jonathan says I'm obsessed with mint and coral, and I laughed this off until I took a step back after it was all done and realized "yep, I am." 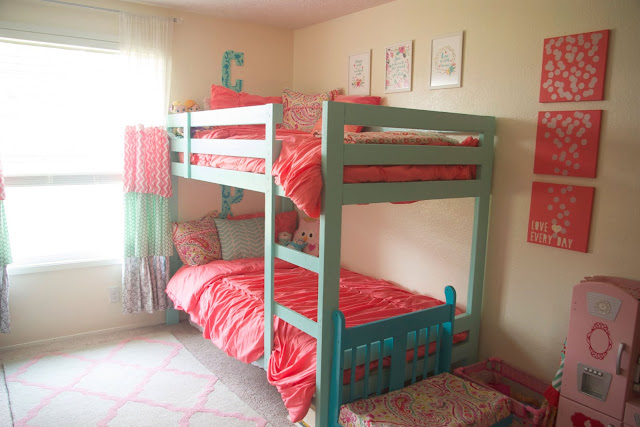 First, the bed. This was the biggest change, obviously. It takes up half of their room- but it was worth it! Jonathan and I worked hard (mostly him) on this project...I learned how to drill and we both learned the kregg jig process (what was life before our kregg jig?). We picked out the color together- its the perfect shade of minty/aqua blue without being baby pastelish or in-your-face bold. (If anyone cares, the color is "Fish Pond" from Behr Ultra). So for weeks we had all the wood in the garage, sanding/measuring/cutting it when we had free time. Slowly it started to come together, but since the doorway is standard size we had to carry it into the house in pieces. We laid a new tarp down in the room and primed and painted it right there so speed up drying time. Also, apparently it is best for paint to cure indoors. We quarantined the girls from their room :) This was HARD- all their toys got moved into the hallway and they slept all over the place...on the couch, in our bed, under T's loft bed...I could tell it was difficult for Charlotte. Towards the end she had a few emotional breakdowns about not having her own space...it broke my heart, so I told Jonathan that we had 3 days to finish it and would reveal it a week prior to her birthday (which is in just two days now!).

I feel like I went to Target or Joanns every day that week... getting all the supplies together was tedious. Initially only Charlotte was getting a comforter but Jonathan said it didn't look right and "They should both be pink". It's pink to him, of course...he's a guy. ;) I was like "Ummm are you sure? That's a LOT of coral...the same comforter comes in other colors..." But he stuck with his opinion and like always...he was right. Two pink/coral/whatever-color-you-wanna-call-it beds looked perfect in the space.

And oh my heck, yall...when I thought up this idea of making them a bed I totally forgot about all that other stuff like sheets and pads and OH YEAH! Mattresses. Those are kind of important...thank goodness we found some for a decent price. (still...ouch to our wallets!) 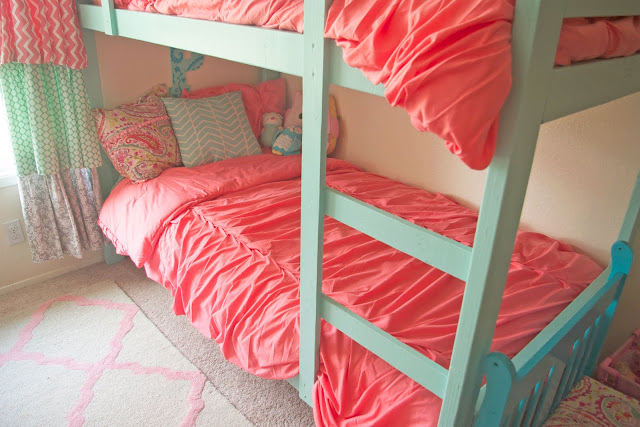 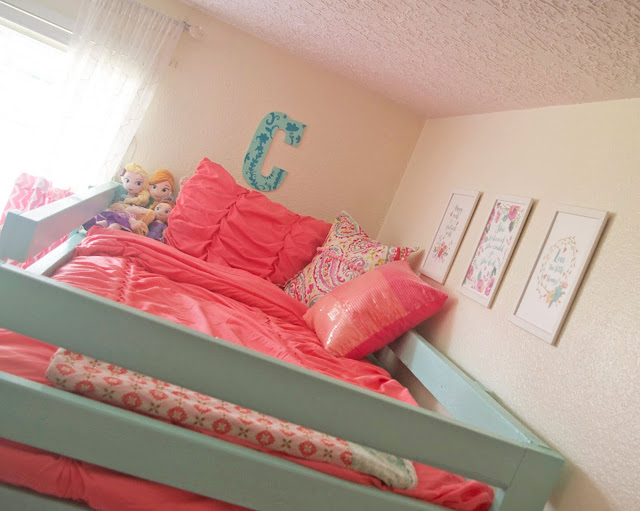 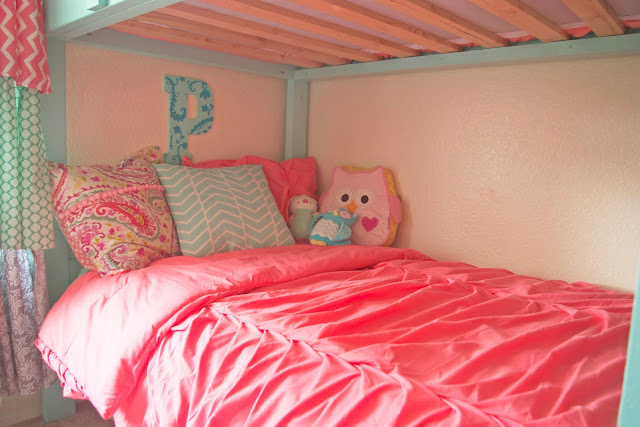 My favorite thing on their bunks are these pillows I made. I saw this fabric a few months ago and knew it would be perfection in their room. It's the inspiration for the entire room- those colors! The watercolor designs! I just die every time I look at it. I added the pom-pom trim for a little bit of spunk. 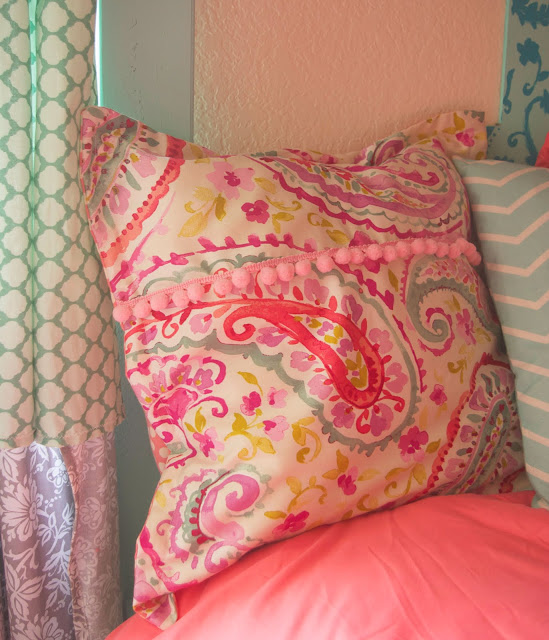 Before the bunk bed, there was a crib and a toddler bed. We demolished the crib- it was falling apart. It did us well for three babies, but honestly Penelope hated that thing and there was no point in keeping it around. We repurposed the front of C's toddler bed into a cute little bench. I used the same lovely fabric to cover the foam seat. 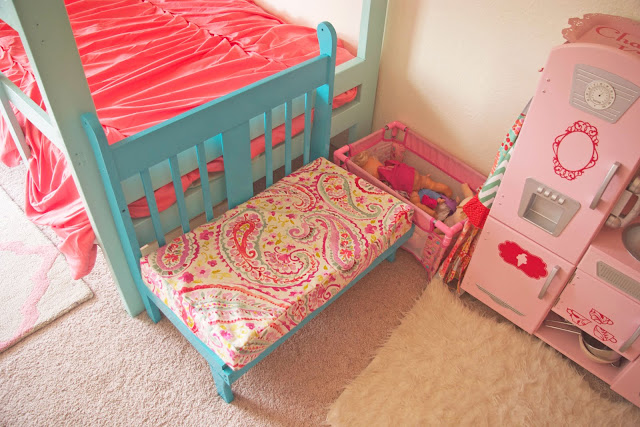 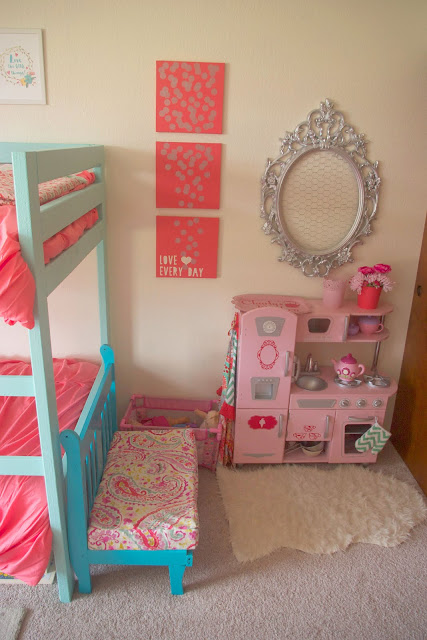 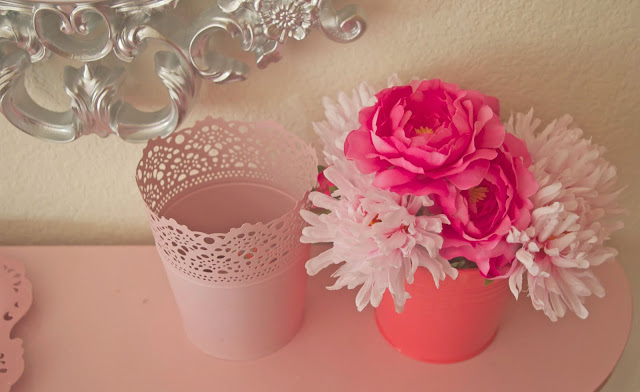 Above the bed are these three prints. Words to live by :)

I want to add that the BEST picture frames for kids rooms are found at Ikea- they are super inexpensive and instead of glass, it's just plastic! So no worries about them getting knocked over or broken. Also easier to hang since they're so lightweight.

And the other side of the room is all the same stuff they had before, shoved up against the wall. haha. 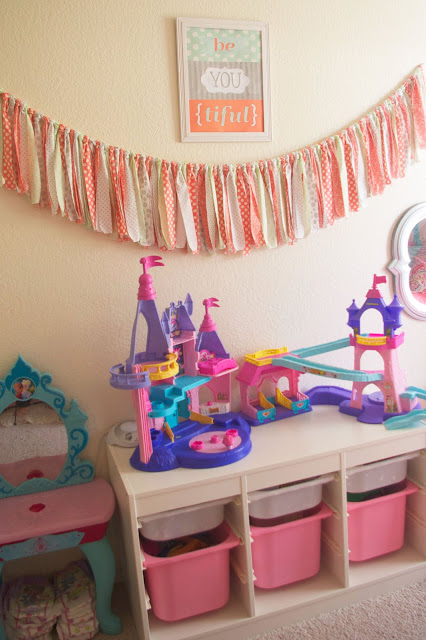 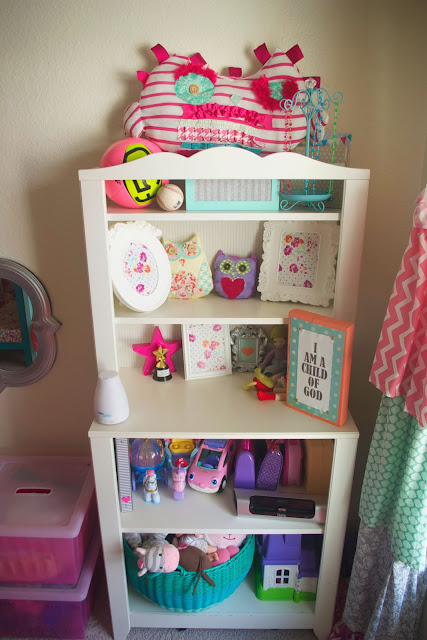 Gertrude was in the room the whole time I took pictures...she follows me everywhere. And she's gotten quite fat. 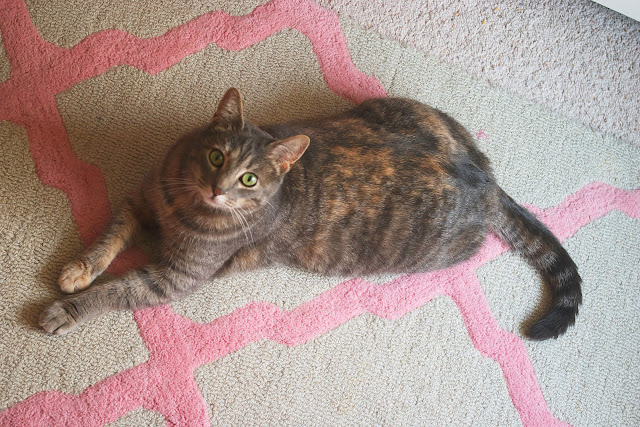 The girls love their room! It's been five days now since we opened it up to them and Charlotte still whispers "thank you mommy for my bunk bed" every time we snuggle up. I love this about her. She is always so grateful and expresses her thanks often- she really does appreciate all the little things. I can't believe she will be 4 this week!
Posted by Unknown at 4:53 PM

It's amazing!!! I love it! Also that Charlotte is my favorite! 😍

I just love this!! Awesome that you guys made the bunk bed- and the bench!! Super impressive. I absolutely love all of it